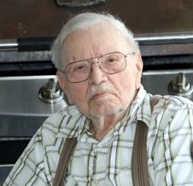 James W. Wasson, age 96, long-time resident of Union City, Indiana went to be with the Lord on June 10, 2022, in Johnson City, Tennessee after a long battle with dementia and other health issues.

He was a lifelong, faithful member of South Salem Church of Christ where he served as a deacon and a janitor.

He was the son of Harold C. and Fern (Shelley) Wasson, both deceased. He was preceded in death by his beloved wife of 65 years Anna Mae (Spille) Wasson and son Brian K. Wasson.

He loved music and had a beautiful tenor voice. He was a member of the Hub City Barbershop Chorus and his church choir. He spent many happy hours gardening raising vegetables and beautiful flowers, notably big red coxcomb by the highway. He was a longtime maintenance foreman at Sheller Globe Corporation in Union City, Indiana.

Memorials in James’ name can be made to the South Salem Church of Christ.

Leave an Eulogy or Condolence for James W. Wasson