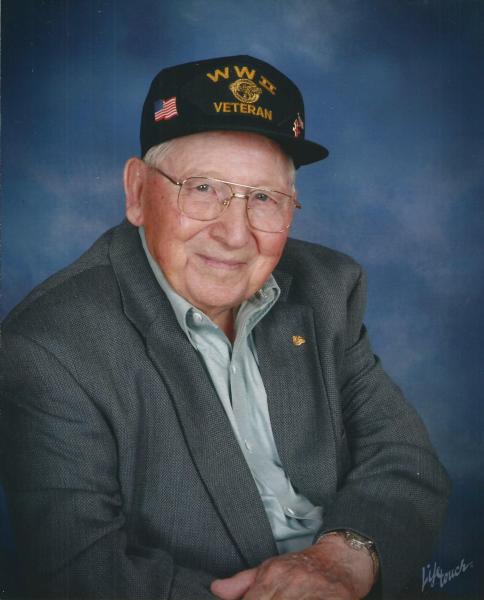 Ernest H. Elliott, age 97, peacefully went to be with his Lord and Savior on June 21, 2021 at the VA Mountain Home in Johnson City, Tennessee.

He is survived by his wife of 76 years; Lucille Blevins Elliott, his only child; Lucinda Grandy and her husband Joe, a sister; Shirley Elliott, Las Vegas, NV and two brothers; Blaine Elliott, Columbia, SC, Glen Elliott, Erwin, TN. Also left to mourn his passing are numerous nieces and nephews.

On a mid-January day in 1943, Mr. Elliott entered the Erwin Post Office with a certified letter tucked inside his shirt pocket and a sick feeling in his stomach. He handed the postmaster his certified letter and in return received his draft notice. He was working as a mechanics helper and hadn’t held the job very long, but didn’t want to give it up. He didn’t have a choice and was now faced with the difficult task of telling his family. As they sat around the dinner table that night, he glanced around at his siblings and realized this would be one of the last times they would be together for months, years or maybe forever. He accepted the call to duty and reported to the Draft Board as instructed. With only the clothes on his back he left for Fort Oglethorpe, GA with a cast on his broken wrist. February 9, 1943 was his induction date and that day forever changed his life. When he was dropped off at the bus station by his Dad and girlfriend he looked around and saw friends that he’d grown up with and felt things were a little easier and that he wasn’t going away by himself for the first time ever. As the bus pulled out of the station and for the first few miles, things seemed dismal. A party soon started when a bottle of liquor was pulled out. There was joke telling and laughter filled the bus. Active service began February 17, 1943 at Fort Oglethorpe, GA. The physical exams, shots, x-rays of his broken wrist were done, his hair was cut and he was issued his military clothing. He only spent three days at Fort Oglethorpe and was concerned because he had not had any training. He was loaded on a train traveled two days, arrived at Camphaus, TX in the middle of the night. He slept in a big building on a bunk and received his permanent company the next day. He was separated from all his friends. His duty assignment was with the Black Hawk Infantry Division where he was issued rifles and packs, but no ammunition. They taught him how to take the guns apart, clean them and put them back together. He then learned the Manual of Arms, how to march and taken to the firing range. Knowing how to shoot but not wanting to become a sniper, he kept trying to miss the targets. The drill sergeant soon caught on and called him out. He began hitting bulls eyes on a regular basis. During this time, he was also taught to throw grenades and pulled guard duty. After basic training he moved to Camp Livingston, LA for additional training. The three months he spent at Camp Livingston he was able to visit home for ten days at Christmas on a furlough pass. Upon returning to Camp Livingston he learned to shoot machine guns and bazookas. He enjoyed pulling KP duty where he washed dishes and peeled thousands of potatoes. The next stop was Fort Ord, CA where he spent about a month before being shipped out. The ship encountered a submarine somewhere in the South Pacific but escaped unharmed. After thirty days, the voyage arrived in New Guinea and in about a week he was sent to the front lines. He was assigned a rifle and had become a sharpshooter in his unit. He fought in several different parts of New Guinea, one being Starvation Hill where he went seven days without food. Food was being dropped to them from planes, but the enemy was intercepting it. Finally, a reconnaissance plane dropped candy bars and he was able to eat something. He served on many reconnaissance missions where he crawled behind enemy lines to find out what they were up to. Killing had become his job and he had no feelings left. He felt like a machine. His leg was severely wounded by flying shrapnel from an artillery shell and he spent two weeks in the hospital before being released back to the battlefield. The Northern Part of Luzon was the next stop and he had gotten so used to being hot, he was now freezing. The was ended with the atomic bomb being dropped but the fighting continued for two weeks. He then spent a month in Japan pulling MP duty for four hours each day before coming home. December 25, 1945, he returned to San Francisco and had a large Christmas dinner on Angel Island. He was discharged from El Paso, TX, hired a cab with five others to bring them to Memphis, hitchhiked to Nashville and then Knoxville before taking a bus to Johnson City where he hired another cab to take him home. His Dad opened the door to him in the early morning hours and didn’t recognize him, the cab driver called out that he had brought his son home. He began working with his Dad building houses after only a day and a half being home. Mr. Elliott fought in ten major battles during WWII and earned medals for Combat Infantryman Badge, Sharpshooter, American Theater, Good Conduct Medal, Asiatic Pacific Theater, Philippine Liberation, Purple Heart and Victory Medal.

In lieu of flowers, donations may be made to Humane Society of Washington County by mail at 2101 W Walnut St., Johnson City, TN 37604, online by visiting www.hswctn.org or to the charity of your choice in his memory.

Leave an Eulogy or Condolence for Ernest H. Elliott

06/26/2021
Coleman Ramsey
Thank you for your service to our country. May you rest in eternal peace.
06/25/2021
Denise Bailey Hoss
Mr. Elliott was a great man. Enjoyed when he came into the insurance office and we talked. Prayers are with the family. Thanks for his services.
06/25/2021
Brenda Duke Caregiver Home Instead Senior Care
Only had the pleasure several time to be with Mr. Elliot. He was the sweetest and a sweet Godly man. Was a blessing to be with him and his wife. Loved when he talked about things that happened in his lifetime. God bless his family and friends. RIP Sir Thanked him for his service to his country . Praying for strength and comfort for his family.
06/25/2021
Joyce Robinette
Deepest sympathy and prayers for the family.
06/24/2021
Allen D. Jackson, USAF (Ret)
Ernest, Thank You for your service and for paving the way for all the service members who followed in your steps. The finest example of Our Greatest Generation and a true American Hero!!! Nothing Is Ever Truly Forgotten!!! We Remember...
06/24/2021
Tammy Yates Johnson
Thank you for your service. It was an honor taking care of him. He was so appreciative of everything we did for him. He was a very sweet man.
06/23/2021
Melissa Williams Noble
Thank you Mr. Elliott for your service. My uncle was a prisoner of war for 18 months. He never talked about it but later in life after his wife died he had haunts of those hard times. To his family, I am sure your lives have been blessed by this man on many occasions. I offer the Peace of Christ to all of you during this time Melissa
06/23/2021
Lisa Shaw-Lewis
Ernest was one of the finest men I ever had the privilege to know. My sincere condolences go out to his family. May he rest in peace.