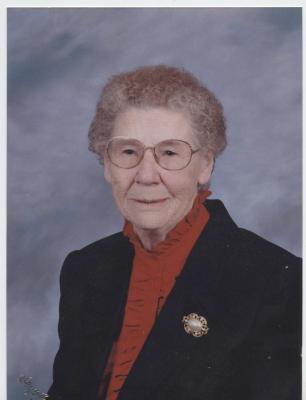 Mrs. Vada Mae Murray, age 98, Jonesborough, went to be with her Lord on Tuesday, December 3, 2013 at the Christian Care Center of Johnson City.

Mrs. Murray was a native and life long resident of Washington County, Tennessee. She was a daughter of the late George & Melinda Shelton Vest. She was preceded in death by her husband, W.O. Murray, an infant granddaughter, brothers, Orvel Vest, Ollie Vest, Bob Vest, Raymond Vest, Claude Vest, B.N. Vest and Dee Vest.

She was a life long homemaker who at the age of 53 returned to school and received her GED. She then continued her studies and became a licensed LPN and was employed by Unicoi Memorial Hospital for four years before retiring in 1972.

Funeral services will be conducted 8:00 PM Thursday, December 5, 2013 at the Dillow-Taylor Funeral Home with Rev. Richie Murrary officiating. Music will be under the direction of Rev. Bill Murray. The family will receive friends from 6:00-8:00 PM Thursday prior to the service.

Interment services will be conducted 11:00 AM Friday, December 6, 2013 at Roselawn Memory Gardens.

Flowers are appreciated, or memorial contributions may me made to the Nolichuckey Baptist Church 288 Hwy. 107 Jonesborough, TN 37659.

Leave an Eulogy or Condolence for Vada Mae Murray